Video online: ‘Cancel Culture. Identity politics as a threat to artistic freedom?’ at the Kulturpolitische Gesellschaft 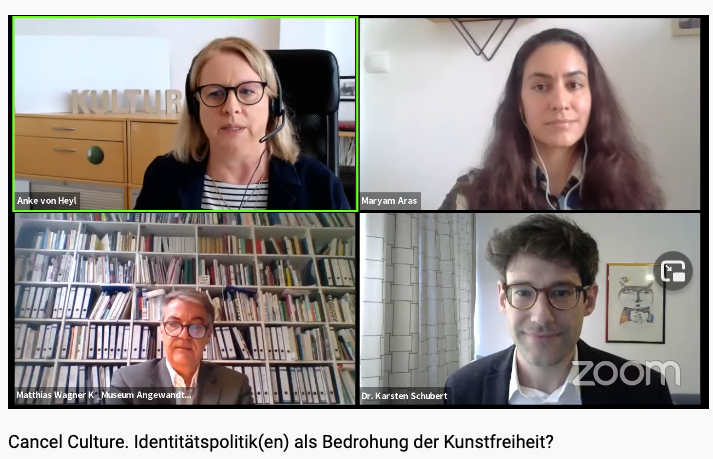 The video of the panel discussion on with Maryam Aras, Matthias Wagner K and me, moderated by Anke von Heyl, is now online. It was a very productive discussion on identity politics, power and privilege in the arts, and how to address racism and sexism. Many thanks to Kulturpolitische Gesellschaft for organizing it!

“Cancel Culture” is popping up as a political buzzword in debates with increasing frequency. Yet this term is contested in the - not infrequently heated - debates and has different connotations. The debates are caught between questions of access, power, attention, interpretive sovereignty, identity (politics), democracy, discourse, censorship, discrimination, protest, justice, and the culture of debate itself. But what does this mean in the context of culture and of artistic freedom? Does “Cancel Culture,” “political correctness,” and “self-censorship” limit artistic freedom? Does “Cancel Culture” contribute to democracy?

These and other questions will be discussed in the web talk “Cancel Culture. Identity Politics(s) as a Threat to Artistic Freedom?” Dr. Karsten Schubert (Executive Assistant at the Chair of Political Philosophy, Theory and History of Ideas at the University of Freiburg), Prof. Matthias Wagner K (Director of the Museum Angewandte Kunst in Frankfurt am Main) and Maryam Aras (Cultural Scientist at the University of Bonn).

I. Democratization through Cancel Culture (Dr. Karsten Schubert, Executive Assistant at the Chair of Political Philosophy, Theory and History of Ideas at the University of Freiburg).

III It’s all about maintaining power. Cancel Culture as an ideological tool. (Maryam Aras, literary scholar, Iranist and critic at the University of Bonn).

Read other posts
← Interview about democracy during the Corona crisis and wealth redistribution Teaching in the summer term: HS Standpoint Theories and HS Radical Theory of Democracy →