New Publication: The Dismantler - A Short Story on the Institutionalization of Progressive Politics, in The Cabinet of Imaginary Laws 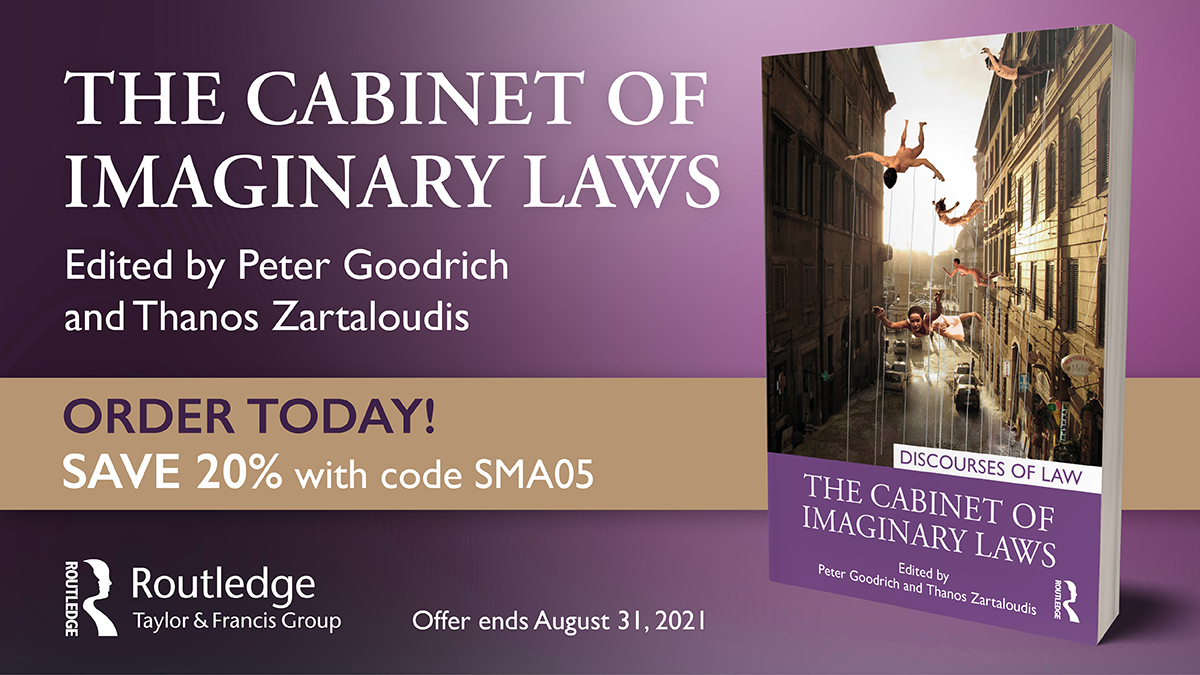 I am honored to be part of this infamous collection of creativity between literature and legal thought, organized and edited by the masterminds of law and literature studies and legal theory, Peter Goodrich and Thanos Zartaloudis. A book enjoyable both at the desk and at the beach.

My story, “The Dismantler”, is about the pitfalls of a new law, the General Act for the Dismantling of Normalising Power and Structures of Privilege, and, more philosophically, about the problems of institutionalizing progressive politics through law.

I thank Tillmann Severin for his artistic consultancy regarding the new challenge of writing fiction.

Returning to the map of the island of utopia, this book provides a contemporary, inventive, addition to the long history of legal fictions and juristic phantasms. Progressive legal and political thinking has for long lacked a positive, let alone a bold imaginary project, an account of what improved institutions and an ameliorated environment would look like. And where better to start than with the non-laws or imaginary legislations of a realm yet to come.

The Cabinet of Imaginary Laws is a collection of fictive contributions to the theme of conceiving imaginary laws in the vivid vein of jurisliterary invention. Disparate in style and diverse in genres of writing and performative expression, the celebrated and unknown, venerable and youthful authors write new laws. Thirty-five dissolute scholars, impecunious authors and dyspeptic artists from a variety of fields including law, film, science, history, philosophy, political science, aesthetics, architecture and the classics become, for a brief and inspiring instance, legislators of impossible norms. The collection provides an extra-ordinary range of inspired imaginings of other laws. This momentary community of radial thought conceives of a wild variety of novel critical perspectives. The contributions aim to inspire reflection on the role of imagination in the study and writing of law. Verse, collage, artworks, short stories, harangues, lists, and other pleas, reports and pronouncements revivify the sense of law as the vehicle of poetic justice and as an art that instructs and constructs life.

Aimed at an intellectual audience disgruntled with the negativity of critique and the narrowness of the disciplines, this book will appeal especially to theorists, lawyers, scholars and a general public concerned with the future of decaying laws and an increasingly derelict legal system.

Read other posts
← New Manuscript: A New Era of Queer Politics? PrEP, Foucauldian Sexual Liberation, and the Overcoming of Homonormativity Radical Democracy and the Representation of Gender Rights Workshop at Center for Interdisciplinary Research (ZiF), Bielefeld →