PrEP as Democratic Biopolitics. On the Critique of the Biopolitical Repression Hypothesis - New Publication in the Yearbook Sexualities

- or: the pharmaceutical destigmatization of gayness 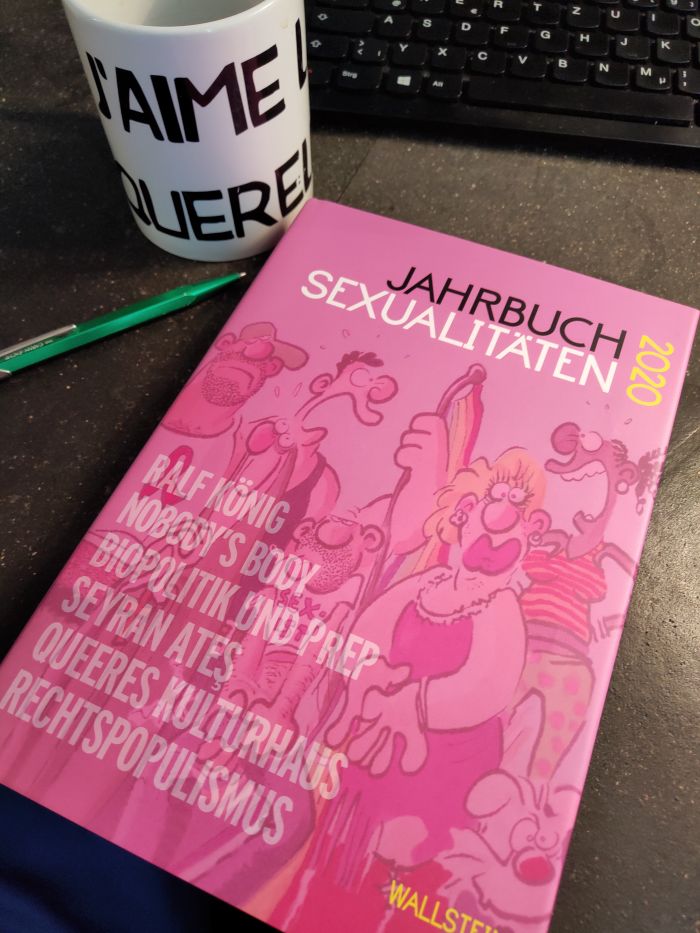 My article “PrEP as Democratic Biopolitics. On the Critique of the Biopolitical Repression Hypothesis - or: the Pharmaceutical Destigmatization of Gay Life” has been published in the Jahrbuch Sexualitäten (5/2020), and I feel honoured to be part of this beautiful publication, in illustrious company with Adrian Daub, Ralf König and Seyran Ates, among others.

Those who prefer moving pictures to texts will find the video of the Queer Lecture here, which I held on the topic.

PrEP (pre-exposure prophylaxis) is a relatively new means of preventing HIV infection. HIV-negative people take antiviral drugs that prevent contact with the virus from leading to infection. In contrast to condom use, this prevention method is based on medication and not on a change in behaviour. From a biopolitical perspective, it fits into a larger trend towards medicalisation, the increase in power of the pharmaceutical industry and the regulation of risk. Sexual behaviour is the result of subjectivation, the process by which social norms form subjects and their desires. The medicalization of gay sex through PrEP changes sexual subjectivation and therefore goes hand in hand with a change in gay sex practices. After a brief explanation of the medical characteristics and history of PrEP (1), this article combines a reconstruction of contemporary theoretical approaches to biopolitics related to PrEP (2) with a presentation of current political debates on PrEP (3). The investigation shows that governmentality studies and Italian theory focus on repressive power relations and therefore cannot take into account the complexity of the debate, which results from the subjectivity and capacity for action of various actors involved, especially gay PrEP activists. Nevertheless, interpretations of PrEP as a repressive power are also used by some actors in the political debate on PrEP, mostly without explicit reference to biopolitical theory. Nikolas Rose’s and Paul Rabinow’s differentiated concept of biopolitics offers some approaches, such as those of biopolitical citizenship and somatic ethics, to describe the debate on PrEP and the complex negotiations on sexuality that are involved. Based on these ideas, I develop a new concept of ‘democratic biopolitics’ of PrEP, which allows for a further democratization of sexuality in the biopolitical age. The article thus criticizes the ‘biopolitical repression hypothesis’, i.e. the concentration on repressive biopower while fading out democratic elements in large parts of the biopolitical and governmentality-analytical debate. Beyond PrEP, the concept of ‘democratic biopolitics’ is a contribution to this general debate on biopolitics and Foucault’s concept of power, because it helps to overcome the ‘biopolitical repression hypothesis’ and enables a more differentiated analysis and criticism of biopolitics.

Read other posts
← 'Political Correctness' as the core of politics. With Nietzsche Against the New Right - New Publication in the Archives for Philosophy of Law and Social Philosophy Video online: Democratic and Populist Biopolitics in the Corona Crisis →