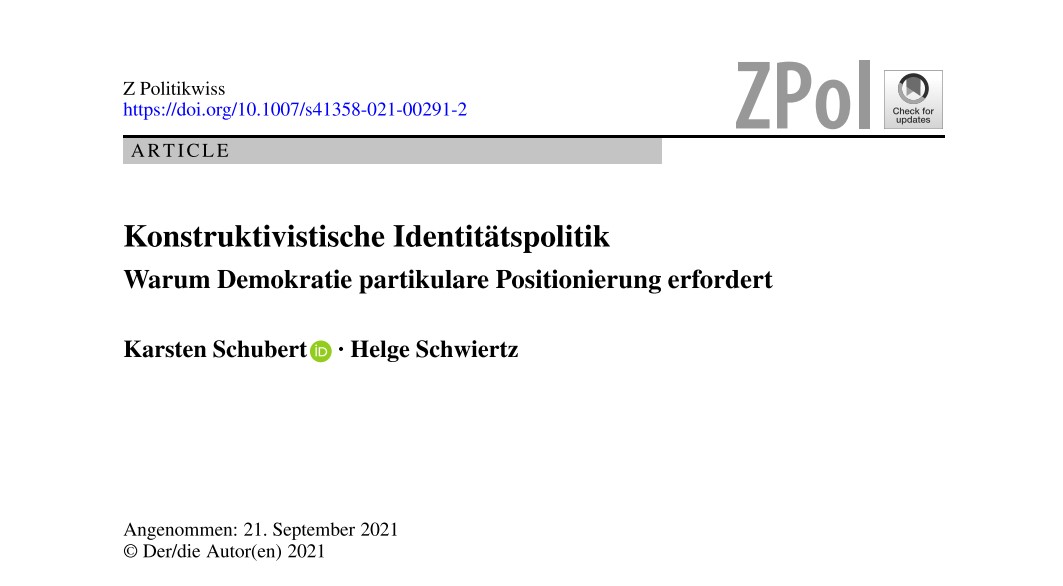 While we are primarily concerned with the academic critique of identity politics, we thereby also aim to make a contribution to the public debate in which some of the arguments we refute are repeatedly made. Such a critique of identity politics was prominently put forward in the spring by Wolfgang Thierse and Sarah Wagenknecht, and just again by Jan Feddersen and Philipp Gessler in the book “Kampf der Identitäten - Für eine Rückbesinnung auf linke Ideale”.

Identity politics is subject to similar critiques in contemporary public debate and political theory. A central topos of this critique is that identity politics is essentializing: it fixes subjects to their social position and resorts to a politics of particularity that leads to divisions in national citizenship and democratic discourse (the communitarian and liberal position) and to divisions within social movements (the critical position). Contrary to this one-sided critique, we propose a different interpretation with the concept of “constructivist identity politics.” We show that political identities are not essentialistically given, but emerge from processes of social and political construction; that they are actively produced, learned, and practiced by political (sub)cultures and movements. In these processes of construction, political articulation and agency are produced, enabling subjects to critique relations of domination and discrimination. Following radical democratic theory, we argue that the particular political perspectives of identity politics thus enabled do not endanger democracy or solidarity in social movements, but contribute to their further democratization by actualizing the universal principles of democracy in particular disputes. While the construction processes of identity politics tend to essentialize and produce exclusions, critical reflection on such tendencies is also inherent to identity politics. This understanding also enables a critique of such identity politics that is not oriented towards the democratic values of equality and freedom and blocks critical self-reflection. After an overview of contemporary identity politics critique, we elaborate this constructivist understanding following debates in feminist and postcolonial theory since the 1980s. Building on this, we systematically develop the notion of constructivist identity politics by differentiating three aspects of it: subjectification, articulation, and representation. We refer to approaches by Foucault, Rancière, Laclau/Mouffe, and Hall and illustrate the respective aspects through examples of migrant self-organizations as well as gay culture and queer critique.

Read other posts
← Teaching in the winter term: Struggles about academic freedom and freedom of expression (MA) and Identity Politics (BA, in English) New post at Theorieblog: Toward a critical theory of academic freedom →