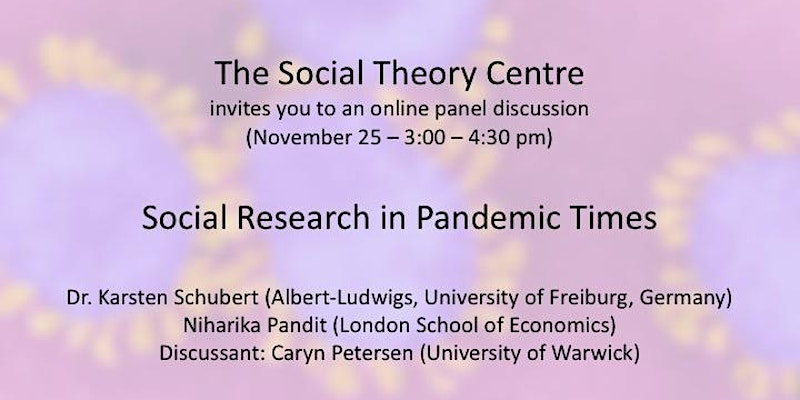 I am looking forward to the panel discussion at The Social Theory Center of the University of Warwick with great colleagues! We will discuss the role of social theory for research in pandemic times.


Niharika Pandit is a PhD researcher working on home and everyday politics of living under military occupation in Kashmir in the Department of Gender Studies at the LSE. She graduated as a Felix scholar in MA Gender Studies from SOAS, University of London. Her research interests include anti-colonial, anti-militarist feminist theory and politics. She is a member of Engenderings editorial collective and an occasional writer. Her work has appeared in the Economic and Political Weekly, The Polis Project, Feminist Review blog, Index on Censorship, Firstpost, Engenderings, The Hindu among others.

Dr. Karsten Schubert is Assistant Professor for Political Theory and Philosophy at the Albert-Ludwigs-University of Freiburg. His work focuses on contemporary critical political theory and social philosophy, Michel Foucault, radical democracy, legal critique, biopolitics, queer and gay theory, and intersectionality. Currently, he researches at the intersection of critical legal theory and the ethics of social criticism. Prior to that he received his PhD in philosophy at the University of Leipzig. His book “Freedom as Critique. Social Philosophy after Foucault” (2018, in German) was published with transcript. Texts, videos and current information at www.karstenschubert.net

Caryn Thandi Petersen is a Commonwealth Scholar and a PhD candidate in Sociology at the University of Warwick. Her research explores the meanings and implications of contemporary expressions of decolonial activism in South Africa and its spread to British universities.