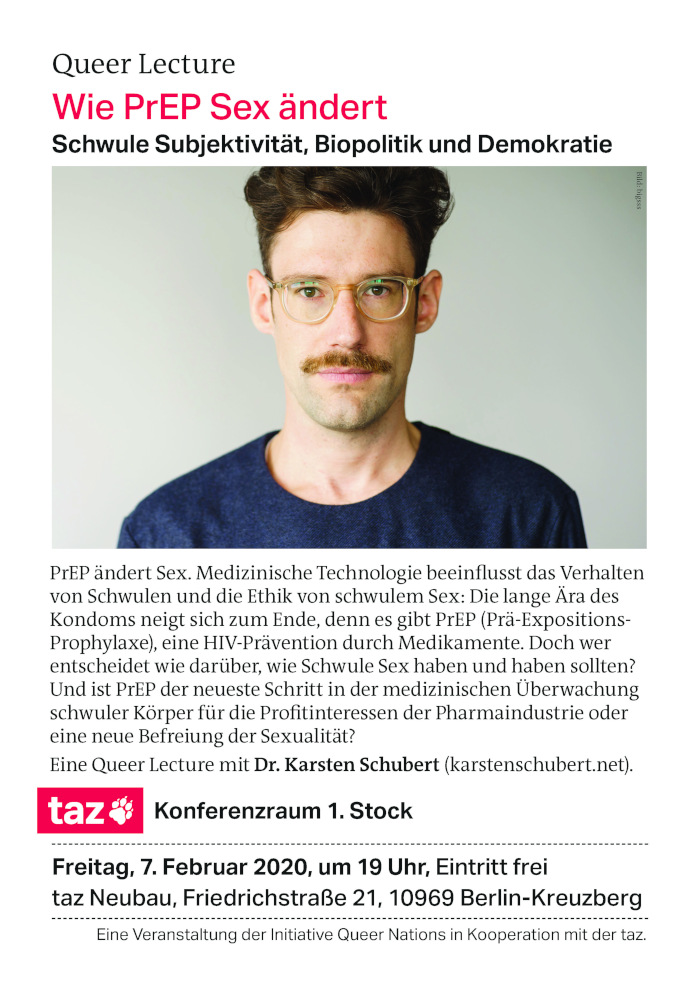 Automaticall translated without proofreading
See also my new essay on the topic, which was just published in magazin.hiv.

Gay subjectivity, biopolitics and democracy - a lecture by Karsten Schubert on the interactions between medical technology, politics and sexual ethics.

PrEP changes sex. Medical technology influences gay behavior and the ethics of gay sex: The 35-year era of the condom is drawing to a close, as PrEP, pre-exposure prophylaxis, a pre-release drug to protect against HIV during sex, is available. But who decides how and how gays have and should have sex? And is PrEP the latest step in medical monitoring of gay bodies for the profit interests of the pharmaceutical industry or a new liberation of sexuality?

In his Queer Lecture Karsten Schubert analyses these interactions between medical technology, politics and sexual ethics. In doing so, he criticizes the narrative of biopolitical repression and shows how PrEP can contribute to overcoming homo- and hetero-normativity by decoupling gay sex from the stigma of death that has determined it since the outbreak of the AIDS crisis. But for this to succeed more effectively, PrEP’s biopolitics must be democratised.

Dr. Karsten Schubert is managing assistant for political theory at the University of Freiburg. He researches and teaches contemporary critical theory, philosophy of law, queer theory. His book “Freiheit als Kritik. Social Philosophy after Foucault” was published by transcript in 2018. On the subject of PrEP he published the article “The Democratic Biopolitics of PrEP”. More: www.karstenschubert.net

A Queer Lecture of the initiative Queer Nations, kindly supported by the taz publishing house.