New CfP of the journal diskurs: Privileges - How useful is the contested concept? 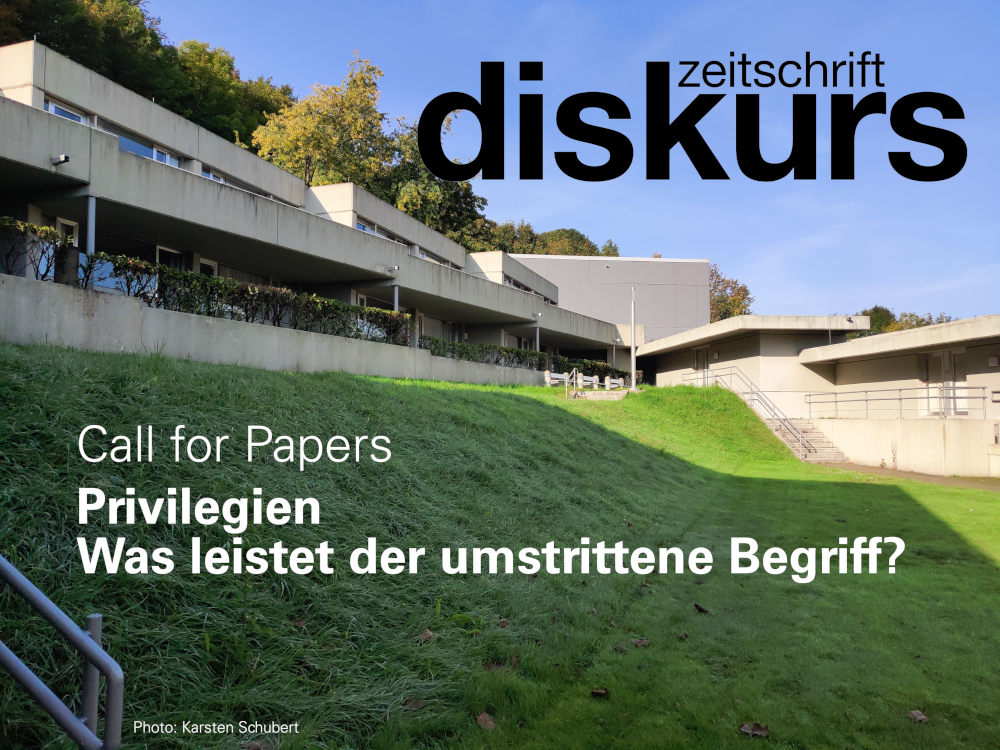 The new CfP of the journal diskurs on the subject of privileges is out!

The coronavirus pandemic with its heated protests against restrictions on public life; the wave of global anti-racist protests against racist police violence following the assassination of George Floyd; and the struggle of youth for policies that take climate change seriously: These are just three examples of contemporary political struggles in which privilege is at the center. The privilege of living in a Western industrialized nation with a functioning health care system, and the very act of wearing a mask can be perceived as a restriction of freedom. The privilege to be white and to be exposed to a low risk of becoming a victim of racist police violence. Or also the privilege of being old and not having to be interested in a climate-friendly future. The concept of privilege is also used to analyze social and economic conditions, for example when the privilege of the home office is mentioned in connection with professions that are not “systemically relevant”, the privilege of wealth or the privilege of being male.

The concept of privilege aims to make visible that social power relations always include asymmetries between different positions, for example, between the privileged and the discriminated. This is often ignored when only the discriminated are mentioned. These then look like the special case, while the profiteers of the relations are not visible as such. Thus, the question of the hegemonic perspective of “normality” is at stake, which allows the privileged not to see themselves as part of the problem and to ward it off, as it were.

While “check your privilege” - i.e., the call to reflect on one’s own privileges - has therefore become a central element of critical debate in many places, the conservative feuilleton and liberal political philosophy have found a new archenemy in the criticism of privilege - in a series of “identity politics” and “political correctness”. While these debates have been heated recently, there are surprisingly few theoretical, philosophical and social science debates on the concept of privilege, the critique of privilege and the political struggles associated with it. The journal diskurs will therefore devote the next issue to the topic of privileges and ask: What does the controversial term do?

We welcome submissions on the following problems and questions, but are also open to submissions that address other aspects of the discussion on privileges.

diskurs brings together innovative social science works that analyze political and social hegemony, power relations, and practices in an original and critical way. Works from political theory and social theory are just as welcome as empirical analyses. Since 2015, discours has been published once a year in its current form with a thematic focus and consecutive numbering.

All articles submitted to us undergo a careful process of editorial and external review (double blind peer review). All published articles are available online and open access. Publications are indexed and provided with a DOI via the publication server of the University of Duisburg-Essen (DuEPublico). Thus, they can be found via all common databases.

More about the journal diskurs